Reasons Why You Need To Use St. John’s Wort

While tacking back to the history of ancient Greece, St. John’s Wort was used as an effective remedy for a plethora of illnesses. It was the most effective solution for nerve disorders. Since this property has been introduced to the people of today, its usage has increased manifolds.

Many studies have proven that it has antiviral and antibacterial properties. It also contains many antioxidants and is anti-inflammatory. This is why it is also used on wounded or burnt skin to treat them. Because of this, it is one of the major sold products in many countries.

The Reasons Why St. John’s Wort Should Be Taken

Research has been done on St. John’s Wort Extract to study its medicinal properties. Professionals have made some claims, but one still needs proper guidance to take this herbal medicine.

1. It Can Cure Mild To Moderate Depression

There are good pieces of evidence that can prove the effectiveness of St. John’s Wort Extract against mild or moderate depression. However, the same cannot be said in the case of severe or major depression. Many studies have proven its results to be similar to that of Selective Serotonin Reuptake Inhibitors SSRI.

SSRI is one of the most effective anti-depressants that doctors prescribe. However, there is a negative aspect of using this medicine as well. It causes a loss of sex drive. But on the other hand, St. John’s Wort, when taken as an anti-depressant, does not show this symptom.

The presence of multiple chemicals like hyperforin, flavonoids, and hypericin provides additional benefits to consumers. In addition, it helps in the production of dopamine, norepinephrine, and serotonin. All of these neurotransmitters are responsible for improving the mood of the taker.

2. It Can Help With Premenstrual Syndrome

The emotional and the physical symptoms of premenstrual symptoms can be treated using St. John’s Wort Extract. Many studies have named it a great solution for pain. In addition, symptoms like irritability, food cravings, cramps, and breast tenderness reduce up to 50% by intake of St. John’s Wort.

3. Improvement Of Mood During Menopause

Various studies have been done to prove St. John’s Wort as a good remedy for the symptoms of menopause. For example, one study claims that when it is taken with black cohosh, it helps in improving anxiety and mood during this period in a female's menstrual cycle.

Seasonal affective disorder or SAD is also a type of depression. This depression happens due to the lack of sunlight, especially during the winters. Usually, this is treated with light therapy that shows steady improvement in curing this disorder.

St. John’s Wort Extract alone can help change a person's mood to a better one. And if this is paired with light therapy, it can provide promising results pretty sooner.

Obsessive-compulsive disorders happen when a person finds himself obsessed with doing some things in a certain way. Once a person develops the compulsion of things, it becomes really hard to let them go. However, with consentient practices and treatment, the patient can reduce the symptoms greatly.

One study stated that people who had taken St. John’s Wort Extract twice a day for almost three months have somewhat gotten rid of this compulsion. Nevertheless, the result may vary depending upon the patient and his condition.

Just like obsessive-compulsive disorder, social phobia binds a person within the set boundaries. This prevents the person from facing people in public or doing certain things while being watched. If a person is given the same dosage as in OCD, it can also help overcome social phobia.

St. John’s Wort is loaded with antibacterial properties. It also helps with inflammation, making it a perfect treatment for some wounds. This extract can treat minor burns. Apply it directly onto the skin in case of burns, wounds, and skin irritation.

If you are thinking about enjoying the benefits of St. John’s Wort, there are multiple different forms in which you can consume it. It is available in tablets, capsules, teas, tinctures, and skill lotions. Thus, to avail of the benefits, choose the one that seems right to you. 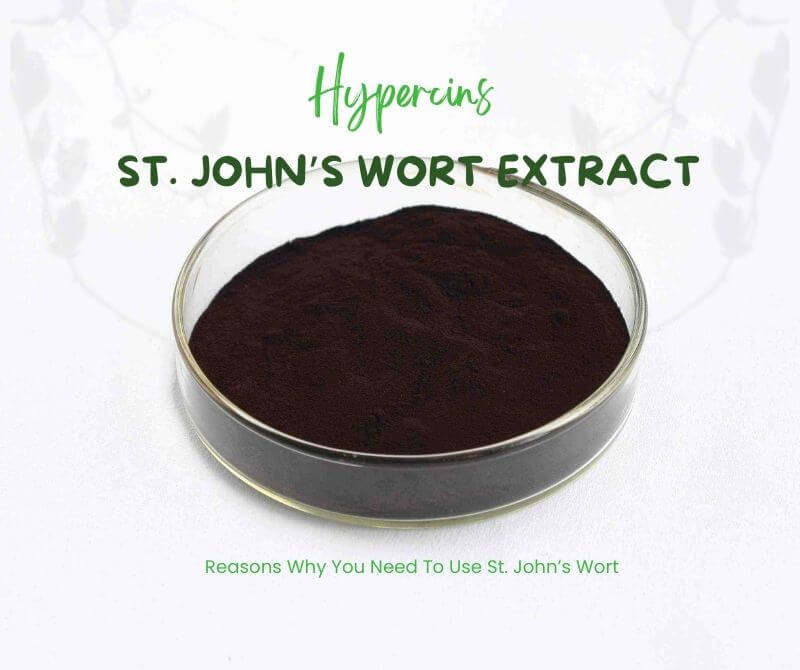